I spent last Saturday touring St. Louis in the years leading up to, during and soon after the Civil War with a lovely group of people ranging in age from about 10 years to 80. A fascination with the American Civil War and its impact on St. Louis was our common denominator along with a desire to virtually travel back in time to this historic era.

After visiting the sites of the Camp Jackson Affair, General Sherman’s St. Louis home after the war, and St. John the Apostle and Evangelist Church which served as the Cathedral of the Catholic Archdiocese of St. Louis during the Civil War, we toured the first story of the Campbell House Museum.

Here Virginia Kyle Campbell, who had nursed wounded soldiers during the Civil War, entertained President Ulysses Grant and his family with an elegant dinner that included, among other St. Louisans, the James Eads and William Tecumseh Sherman families. Robert Campbell made an impassioned plea in 1861 for Missouri not to seceed from the Union and outfitted Federal troops in the South with wagons, horses and supplies out of St. Louis.

We paused to pay tribute to Ulysses S. Grant, whom historians credit with saving the Union, across from Washington Square where his sculpture can be seen adjacent to City Hall. The bronze rendering of General Grant by Robert Porter Binghorst is the oldest work of art Downtown and once stood right in the middle of 12th Street (today Tucker Blvd.), one of the busiest streets in the city, powerfully symbolizing the place Grant held in the hearts of St. Louisans, many of  whom – including future brewery-magnate, Adolphus Busch – served under him during the Civil War.

As we made our way to lunch at the Old Spaghetti Factory on Laclede’s Landing I pointed out the locations of the Grand Mississippi Valley Sanitary Fair held in St. Louis in 1864 and the Confederate Women’s Prison on Chestnut Street which had been the townhouse of Margaret McLure before the Union Army confiscated it – as referenced by William Winter in CIVIL WAR ST. LOUIS* and  Paulette Jiles in ENEMY WOMEN.**

Laclede’s Landing provides a perfect architectural context for the Civil War since many of its beautifully restored warehouses were standing when the war broke out. The Raeder Building, which houses The Old Spaghetti Factory, is an exception. 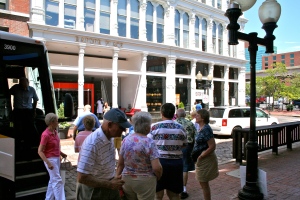 It replaced the deteriorating Missouri Hotel where black refugees were temporarily housed before being moved to Benton Barracks. Tragically hundreds died there of smallpox. After the war thousands of former slaves had made their way up to St. Louis and settled alongside the Mississippi River with nowhere else to go, in an area that became known as Camp Ethiopia.***

The legendary saferoom on the Underground Railroad between 2nd and 3rd 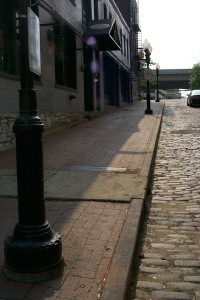 Streets on Morgan Street was a major point of interest and we stopped to capture photos of the very uneven sidewalk outside a side entrance to the Morgan Street Brewery beneath which the saferoom was located.

Front Street/Lenore K. Sullivan Blvd. was unfortunately closed, as it has been much of the summer due to flooding, so we could not travel it as I talked about Confederate spies blowing up steamboats moored here at the Port of St. Louis, Robert Louden’s destruction of The Sultana in which hundreds of Union POWs were lost, and the ironclads which James Buchanan Eads designed at Carondelet making possible the Union victory at Vicksburg.

But we paused in front of Metropolitan Square to see where Meriwether Lewis Clark lived (the northwest corner of St. Louis Place at Broadway & Olive) before becoming a Colonel in the Army of the Confederacy and where the social headquarters of the secessionist Missouri Militia, the Berthold Mansion, stood throughout the Civil War (today the southeast corner of Metropolitan Square).

We stepped off the coach at 9th & Locust Streets to enter the U.S. Custom House and Post Office (“Old Post Office”), the only confirmed fortress in Downtown St. Louis, which has as the focal point of its sky-lighted atrium, Daniel Chester French’s powerful sculpture grouping, “Peace and Vigilance”. “Peace” holds an olive branch, “Vigilance” holds a sword and that’s a great, American bald eagle spreading its wings in the center. These are the original marbles moved inside for safe-keeping and replaced with a polymer-concrete copy at the base of the steep mansard roof  in front of the Post Office.

Alongside Kiener Plaza, we commemorated Dred Scott and his valiant, landmark suit for freedom in the Courthouse at St. Louis. The decision of the U.S. Supreme Court nullifying the verdict of the St. Louis jury that awarded Scott his freedom contributed to civil war. Fourth Street between Market and Chestnut Streets has been re-named in honor of Dred Scott, who lived less than one year of his life in freedom. http://www.thedredscottfoundation.org/dshf/

Elizabeth Hobbs Keckley, who lived just across Broadway from the Courthouse in 1860, made her way to Baltimore and then Washington, DC. A modiste of great skill and creativity, Elizabeth Keckley went from slavery, to freedom and entrepreneurship, fashioning gowns for First Lady, Mary Todd Lincoln in the White House.

Continuing south on Broadway we paused at the site of the old Busch Stadium under which the channel of a lost cave once ran – used first as an extension of Bernard Lynch’s slave pen and later part of the Myrtle Street Prison – as well as The Field House Museum (birthplace of poet and journalist, Eugene Field and residence of his father, Roswell Field, attorney to Dred Scott) on our way to the site of the Gratiot Street Prison. Originally Joseph Nash McDowell’s Medical College, it became the largest and in time the deadliest Federal prison in the state of Missouri for Confederate soldiers and spies (many of them women).

No Civil War St. Louis Tour would be complete without a visit to Lyon Park with its monuments to General Nathaniel Lyon who preserved the Federal Arsenal of the West from falling into Secessionist hands in May of 1861. Arsenal Street takes it name from the military complex which stood at its foot, along the west the bank of the Mississippi River, before and during the Civil War.

We swung past the Chatillon-DeMenil Mansion, where the bars on the windows date to the early 1860s, when they were placed there 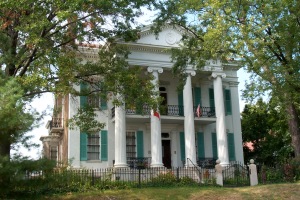 to keep out “the Federals” stationed at the foot of Arsenal Hill.

The Chatillon-DeMenil Mansion is considered one of the finest examples of Greek Revival architecture in the mid-Mississippi River Valley. It’s actually two houses in one – the older, rear section, a farmhouse constructed by Henri Chatillon, Francis Parkman, Jr.’s guide on the Oregon Trail and the front section – a copy of Henri Chouteau’s mansion at 12th & Clark Streets that overlooked Chouteau’s Pond.

Our final stop was the Confederate Memorial in Forest Park, very beautifully scuplted by George Julian Zolnay. A native of Hungary, Zolnay was teaching art at Washington University when he won the commission for this work which depicts “The Angel of the Confederacy” in low relief, in granite above a highly detailed bronze sculpture of a family sending a youth off to war. Zolnay, who sculpted city founder, Pierre Laclede, in Washington Square and the angel mourning at the gravesite of David Francis on Prospect Hill in Bellefontaine Cemetery, did some of his most lyrical and dramatic work on the Confederate Memorial.

Of course, these are only the highlights of the CIVIL WAR ST. LOUIS TOUR that I conducted this past Saturday. If you want the full stories you must come and take the tour with me sometime between 2011 and 2015 when I hope to be offering it again. My special thanks to Andy Hahn, Director of  The Campbell House Museum and Ingrid Mosley of the Desco Group at The Old Post Office for opening these historic St. Louis landmarks to us!

* CIVIL WAR ST. LOUIS: A GUIDED TOUR – William C. Winter – the illustrated, “bible” of St. Louis history in the Civil War and my primary source for this tour.
** ENEMY WOMEN – Paulette Jiles – painstakingly researched, poetic and compelling novel of the Civil War in southern Missouri and St. Louis;heart-breaking account from the perspective of a young woman caught up in the conflict.

The copy & photographs on this blogspace are the work of Maureen O’Connor Kavanaugh and may not be used without the express permission of the author. Permission to reprint may be obtained by contacting maureen@stlouiswalkingtours.com.