Day Tripping on the Downtown Trolley

Posted on August 6, 2010 by stltourguide

On June 28th, 2010 Metro St. Louis launched a Downtown Circulator decked out to resemble a trolley that’s turned out to be the best thing since sliced bread for tourists and home-towners alike. It’s not only cute and convenient (they run 10 to 20 minutes apart) but it’s the best deal in this, (and maybe any) town. 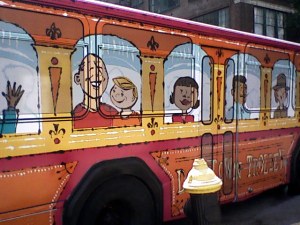 At a modest cost of $2.00 for adults and $1.00 for children you can ride the Downtown Trolley an unlimited number of times between 5:30 am and 12:00 midnight, Monday thru Friday and between 7:00 am and midnight on Saturdays. (Think Cinderella; keep the stroke of midnight in the back of your mind, and you’re good to go.*)

The Trolley Route was designed to fill in the gaps downtown where MetroTrains do not run – making entertainment venues and city landmarks more accessible to tourists and making it more affordable and convenient for office workers to take a jaunt to restaurants on the other side of town without having to get the car in and out of the parking garage. And since it intersects with 18 separate city/county MetroBuses it facilitates getting into and around downtown for commuters.

Since Trolley stops are clearly labelled and frequent, and schedules are available to hotel concierges, navigating Downtown St. 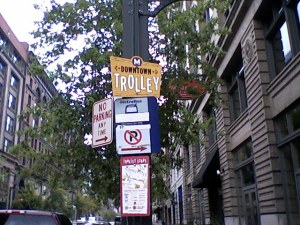 Louis is now easy for tourists. If they happen to catch a trolley driven by Kevin Woods, a St. Louisan who knows downtown like the back of his hand, they’re treated to a guided tour of the city’s landmarks and hot spots.

But what makes the Downtown Trolley particularly appealing is that it is very family-friendly. Parents and grandparents can take marvelous day-trips with the kids without the hassle of negotiating traffic, parking, feeding meters and knowing where to go. I took the trolley a week ago with the intention of scouting out the route for prospective adventures with my six grandkids who love to go exploring Downtown. Kevin Woods agreed that this is a wonderful way for grandparents to spend a day seeing the sights and sharing their own childhood memories of Downtown St. Louis with their grandchildren.

He also pointed out that since the trolleys are actually wheelchair accessible buses, individuals with disabilities can also go sight-seeing on the trolley with a minimum of difficulty.

Here are some possibilities for Day-Tripping on the Downtown Trolley and experiencing highlights of Downtown St. Louis:

1. Getting Started: If you’re a home-towner, park free at a designated Metro Park ‘n’ Ride lot & buy a round-trip ticket. Metro Train Stations connect with Trolley stops so you can step on and purchase a trolley ticket for the remainder of the day OR drive to 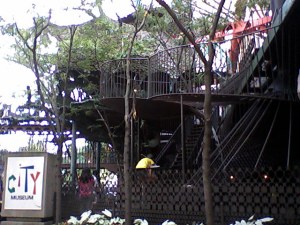 15th & Lucas Streets (1 block north of Washington Ave.), park all day in a lot at the City Museum for $5.00 & then catch the Downtown Trolley for $2.00. If you’re a tourist you simply purchase your ticket from the driver. Remember, hold on to that ticket – it’s good all day!

2. The City Museum – enormous indoor/outdoor play space and most kid-friendly, a-typical art museum in the U.S. (if not the world) http://www.citymuseum.org/home.asp. If you and the kids have never been here before, plan to spend half-a-day. 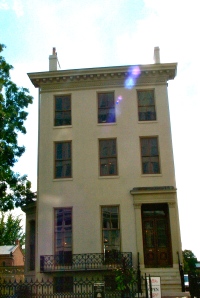 http://stlouis.missouri.org/501c/chm/ – from 15th & Washington walk 2 blocks south. One of the most remarkably restored, 3-story Victorian townhouses in the U.S. Most of what the Campbells owned is still inside the house. Guided tours are only $7.00 for adults. Children under 12 are free! Be sure to ask about the ghosts.

4. The Old Post Office, Central Express Library, Schnucks Culinaria & Macy’s – get off at 9th & Washington & walk 2 blocks south. Visit the Central Express Library in the beautiful Old Post Office Building. It’s a cool library space with the newest released titles. (If you or the kids have brought along a library card they can take things out and experience bringing home something valuable that you didn’t have to pay for.) Be sure to look at Daniel Chester French’s sculpture grouping, “Peace & Vigilance” in the atrium beyond the library and a neat, small, free museum of the building itself, in the east wing. There are also restrooms west of the atrium. You can take the kids to Schnucks Culinaria where they can pick out lunch & take the elevator to eat upstairs or walk 2 blocks east of the Old Post Office & take them to lunch at one of Macy’s two diningrooms.

5. Metropolitan Square, Starbuck’s & the Bread Co. – get off at Broadway & Olive across from Metropolitan Square – the tallest skyscraper downtown & walk through the lobby & atrium to see the murals. (By the way William Clark died across the street where there’s a placque on St. Louis Place.) Walk out the back of Met Square. Starbuck’s is across the street to your right. The Bread Co. is one block to the left. Frappacino or Frozen Mocha – your pick.

http://www.nps.gov/jeff/index.htm – the treasure trove of St. Louis history downtown. Dred Scott sued for his freedom here. The museum is free. There are restrooms. Find a painting of Dred Scott. See what’s left of Manuel Lisa’s Fur Warehouse and how most of the houses of Colonial St. Louis were built. The park rangers are friendly and knowledgable. Ask them about the time capsule in the gold ball above the dome. 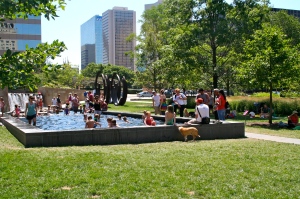 8. Soldier’s Memorial and Military Museum – www.stlsoldiersmemorial.org Admission is free but donations are appreciated. Point out the blood-red mosaics in the ceiling of the open court. Discuss why that representation of sky is not blue.

10. The Scott Trade Center – for special events. Get off at the Civic Center stop and walk one block north.

11. Homeward Bound: If you took the train downtown you can catch one home at Civic Center (or any other MetroTrain stop. If you parked near The City Museum take the Downtown Trolley back to where you started.

If you’re splurging a bit you can take the kids to Left Bank Books at 10th & Locust to pick out a book, a puppet, or a puzzle or shop the clothes sales at Macy’s.

The Downtown Trolley is projected to run through December 2010 which suggests all sorts of fun possibilities for holiday sight-seeing and shopping. Of course the above suggestions provide for not one but many day trips 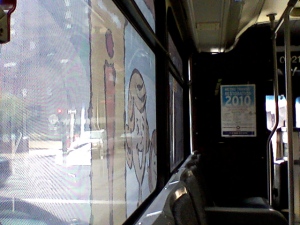 downtown. And hopefully the route will prove so popular that it will continue into 2011. Congratulations to Metro, the Downtown St. Louis Community Improvement District and the Convention Visitors Commission for recognizing the critical need for this service and working together to provide it!

* Depending upon your location as midnight approaches you’ll want to refer to a Metro 99 Downtown Circulator Schedule since the last pick-up at your particular stop may actually be 11:52. Hopefully by this time of night your kids or grandkids are snug in bed at home. (And if you’re on your way back to your hotel from a night on the town you want to hop the last trolley before your glass slippers turn to dust.) Metro schedules are available online at: www.metrostlouis.org and in the Metro Visitors Center at Convention Center (northwest corner of 6th & Washington).

The copy & photographs on this blogsite are copyrighted and may not be used or reprinted without the express permission of Maureen Kavanaugh. Permission to reprint may be obtained by contacting maureen@stlouiswalkingtours.com.

I am a walking tour and narrated coach tour guide in St. Louis, Missouri specializing in the history of the area.
View all posts by stltourguide →
This entry was posted in Commentary and Criticism, Happenings, Neighborhoods, St. Louis and tagged City Hall, Citygarden, Civic Center, Downtown St. Louis Trolley, Metropolitan Square, The Campbell House Museum, The City Museum, The Old Courthouse, The Old Post Office. Bookmark the permalink.

4 Responses to Day Tripping on the Downtown Trolley