Posted on September 25, 2014 by stltourguide

Great old cities, like great quilts fray and fall to pieces. In order to remain vibrant they have to be revitalized.

Cahokia, the first city on the landscape that became St. Louis, defined by archaeologists as the first city north of Mexico, confirms this. For while Mississippian Mounds survive in great numbers and scale – the homes, the language, the beliefs and the nature of the people who constructed them are lost to history.

St. Louis is made up of seventy-nine city neighborhoods that form an irregular quilt-like pattern which wraps itself around a broad bend of the Mississippi River.

In St. Louis, within the downtown neighborhood alone, bits and pieces of the urban landscape are being revitalized by individuals, civic groups, businesses, and municipal, state and federal governments committed to saving them.

The land lid under construction over I55 between Market and Chestnut Streets replaces a center section of Rue des Granges (aka Third Street/aka Memorial Drive). The Street of Barns formed the western perimeter of the Colonial Village of Saint Louis proper. It was the narrow street along which St. Louisans built their barns, between their homes and the Common Fields in which they grew their crops.*

Walnut Street, originally Rue de la Tour (named for the Spanish Tower of Fort San Carlos which was located one block west of here and from which St. Louis was defended the only time it was attacked in May 1780) has been widened into a two-way street with a covered walkway on the north side of the bridge. The newly installed street sign in French is an STL250 initiative of French heritage group, Les Amis. 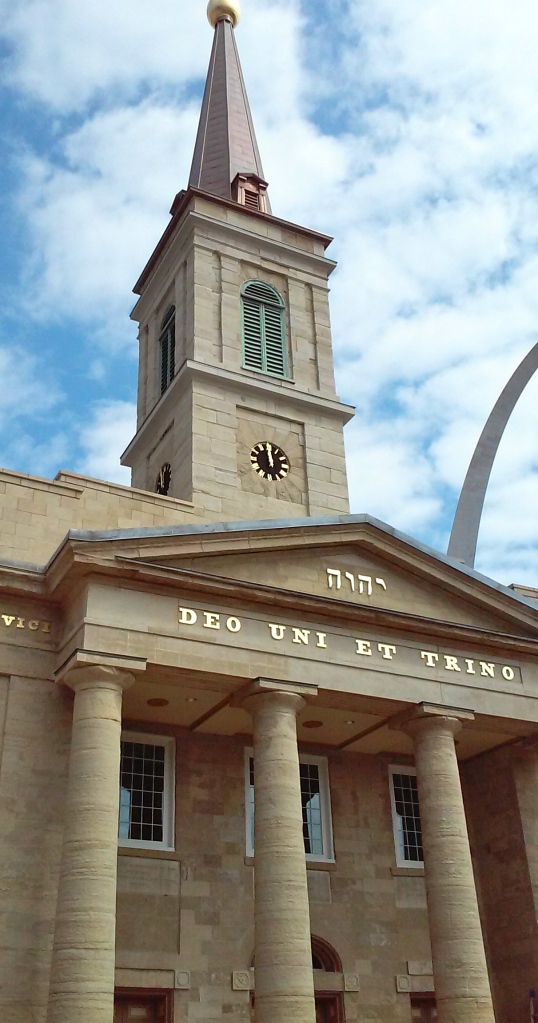 Walnut Street ends at The Basilica of St. Louis, King, the first Catholic cathedral west of the Mississippi, which stands on the only piece of land in St. Louis never been bought or sold. A complete restoration/renovation of the oldest man-man structure on the downtown riverfront is nearing completion, from the gold-leafed ball atop the steeple, to the lettering on the facade in French, English, Latin and Hebrew, to the underground museum and crypt where Bishop Rosati lies buried. 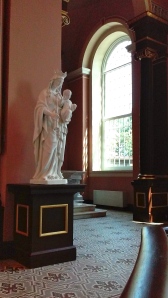 The interior of the basilica is full of surprises from the color palette, to the detailed stenciling on columns, the beautifully-restored maple flooring in the body of the church, and the mosaic flooring with its fleur-de-lis pattern in the sanctuary. Fleur-de-lis formed the coat of arms of Louis IX of France.

No building in St. Louis has offered a more continuous view of the city’s dramatic evolution from a frontier capital when covered wagons lined 3rd Street to a frontier of human exploration – of the west, of aviation, of outer space – encapsulated in Eero Saarinen’s steel arch. Where the former interior design was tranquil and serene, the restoration resonates a reverent 19th century elegance.

The entire spectrum of Judeo-Christian architecture

is embodied in this Greek-Revival worship space, first cathedral of the West, constructed primarily of native limestone.

Jean Baptiste Charbonneau, the little boy born to Sacagawea near the start of the Lewis and Clark Expedition, was christened in the second of these in late December of 1809.**

Four blocks west and six blocks north of The Old Cathedral the last pieces of a broken landscape along North 8th Street between St. Charles and Locust Streets have been restored or replaced. 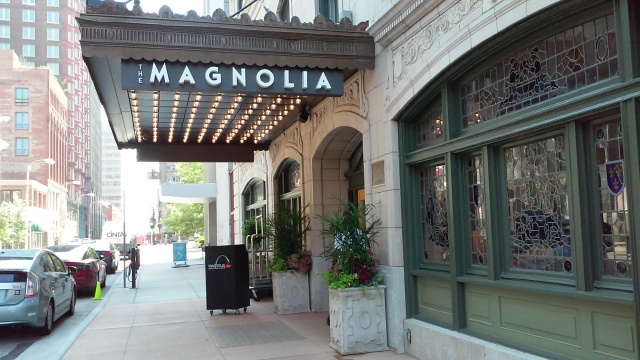 The handsome, boutique Mayfair Hotel has been by re-envisioned by Magnolia Hotels, a company that specializes in transforming historic architectural structures into state of the art inns – first in Denver, then Dallas, Houston, Omaha, now St. Louis. 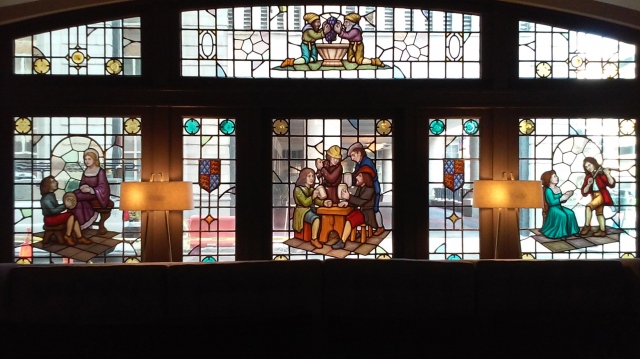 They’ve restored the Mayfair’s signature features – beautiful plaster and brass work, and  jewel-toned, art glass windows, and lit a marquee at the entrance to The Magnolia St. Louis (http://www.magnoliahotels.com/magnolia-stlouis/about-hotel.php) that adds a bit of Manhattan pizzaz to North 8th Street.

In her wonderfully nostalgic The Grand Hotels of St. Louis, St. Louis author Patricia Treacy writes that four thousand invited guests filled the lobby of The Mayfair on August 29, 1925 for the hotel’s grand opening.

“The hotel, designed by Preston Bradshaw, was built of mat-faced brick with terra cotta trim in the Italian Renaissance style, which was carried into the foyer and lobby with its handsome hand-painted ceiling.”***The world-famous Mayfair Dressing was created here, KMOX Radio was launched in 1925 from a studio on the mezzanine and matinee idol Cary Grant began the tradition of leaving a chocolate on the pillow.

Due south at 411 North 8th Street, The Tower at OPOP  (http://apartments.naproperties.com/missouri/st-louis/the-tower-at-opop/photo-gallery) quite literally towers over, what was first the Mercantile/now U.S. Bank, which has been a neighborhood anchor for decades.

St. Louis has been enormously gifted by skilled artisans and craftspeople over ten generations, many of them immigrants who came to the city with expertise in various trades, and many who came from other parts of the U.S. to make St. Louis home.

Their work has left a treasure trove of beautifully designed and decorated buildings, masterfully engineered by local companies capable of not only conversion for contemporary use but inspiration with their artistry.

Continuing south to the intersection of North 8th and Olive Streets we find a huge renovation underway on the soaring Arcade-Wright Building (Tom Barnett-Eames & Young) crowned with its splendid, cathedral-style windows. One of the nation’s earliest experiments in an indoor shopping mall and the most daring Gothic-Revival confection downtown, the Arcade-Wright Building was abandoned in the 1980s. 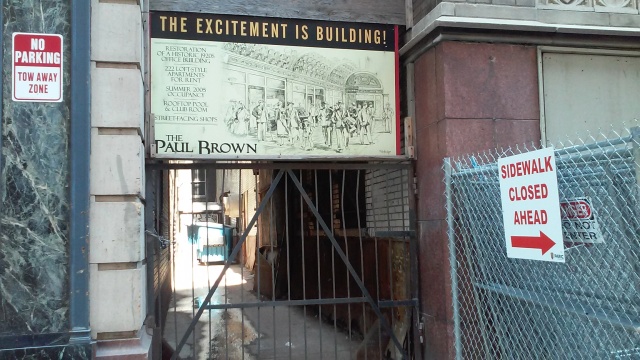 Once designated the city’s “most visible emblem of decay”****(http://www.builtstlouis.net/arcade0.html), when Minneapolis-based Dominium Development (who’ve rescued it) meets their target opening date of 2016, The Arcade-Wright Building will be a stunner to compare with its mythical neighbors, allowing St. Louis architect Tom Barnett to once more stand gloriously shoulder to shoulder with the likes of Henry Ives Cobb, Louis Sullivan and Alfred B. Mullett in a two-block area.

According to Kevin Killeen of KMOX Radio “the 16-story historic building at 810 Olive will soon house three stories of Webster University and, above that, loft apartments.”***** Webster University plans to open an art gallery at street level and a campus for a thousand students.

Meanwhile in a south side corner of St. Louis, smaller but no less beautiful dreams are taking shape in yet other distinctive old buildings, including a vintage Standard Station.

Sumptuous Parisian pastries? A cozy tea room in which to spend a leisurely hour with friends? (http://www.simonefaure.com/)

Airy cotton camisoles is a sunny storefront window that beg trying on? Or maybe a shop where your children can play while you browse?

All of these you will find a few blocks north of The Missouri Botanical Garden on Tower Grove Avenue in the Botanical Heights Neighborhood.

Union Studio (https://www.facebook.com/StlUnionStudio) at 1605 Tower Grove Avenue is one such a place. Co-owned by Mary Beth Bussen and Maggie Wheelock, Union Studio is a place for creative activity – art classes of many kinds, some for adults, some for children – weaving, perfumery, painting – even theater improv.

Maggie Wheelock is a freelance designer and fine artist whose work encompasses several genres. She exhibits her work for sale in this homey studio. She is also the owner of Magpie Design Studio (http://magpiedesignstudio.com/about.html).

The afternoon I shopped for baby gifts I found a beautiful wooden sailboat made by Mary Beth’s dad, a vintage top and reversible cap, and a Onesie imprinted with one of Maggie’s delightful birds. I also found water color notecards and kitchen towels printed in original designs. Union Studio has a wonderful ambience. A studio/shop flooded with light where patrons are warmly welcomed and invited back to create art of their own.

This four block area of McCree Town with its design studios, pastry shop and restaurants highlights the enormous progress made in an area of the city formerly plagued by absentee landlords, drug trafficking and gang violence.

A substantial involvement by the Missouri Botanical Garden enabled area residents, business owners, developers and a pro-active neighborhood organization to recreate this fractured part of the city.******

Whether in downtown St. Louis, where hotelier Charles Drury rescued the International Fur Exchange and American Zinc Buildings connecting existing structures with a new expansion and breathing new life into them, or within the seventy-eight other widely variegated neighborhoods of the city, it takes concerted effort and collaboration on many levels to repair the frays and stitch the pieces back together. But we’re doing it. 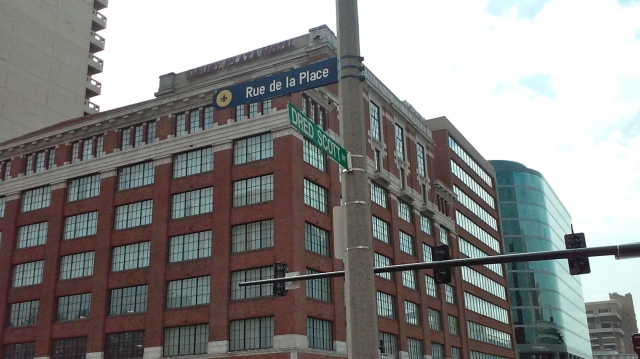 St. Louisans are hard at work in this 250th Anniversary Year – identifying and preserving our historic past, investing in new vision, and boldly recreating places in need of renewal. It’s a process that will never end while the city lives.

Photos: Westward View of St. Louis Skyline, Sept. 2008 -Capt. Timothy Reinhart, USAF – in the public domain at wikipedia.org. All other photos by Maureen Kavanaugh, author of this blog.

4 Responses to Piecing a City Together: Recreating St. Louis