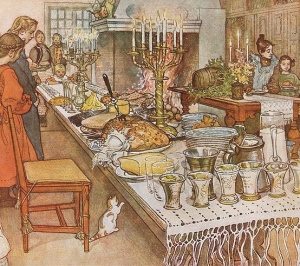 The clock is chiming half past ten and I find myself with a little time to send you Christmas greetings and to wish you a joyous New Year before I dress for church. In a little while I will awaken my sleepy children for they’ve been on their best behavior all week with the promise that they might attend the Midnight Mass and afterwards the Reveillon, the first feast of Christmas! The baking is finished and the house is filled with the most delicious aromas – of roast turkey and souflees and croquecignolles** rolled in sugar and cinnamon. Not to mention the holly and evergreen that we gathered yesterday and draped over the windows.

I know that you will think Marie Louise 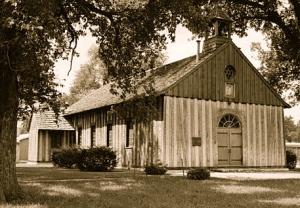 and Victoire too young to stay up for tonight’s festivities but it is rare for us to have a priest in the village and besides – no other night in the year will match this one for beauty. Our little church, a very humble structure of vertical posts, with hardly enough space for all who will attend – is nevertheless brand new, completed and dedicated in June. Not only the villagers but the Lt. Governor of Upper Louisiana, Pedro Piernos, his wife Felicite and their children, his Spanish militia – many with families, and the friendly Peoria Indians who are our neighbors to the south will be there. Chief Little Turkey is making his way, even as I write, with all of his family and the members of his tribe to join us in the church for the beginning of Christmas.

After he preaches to us in French, Fr. Gibault (of Montreal in Quebec) will speak to the Indians in their own language. He has been a missionary for many years and will be kept very busy in Saint Louis with marriages and baptisms before he journeys out again. A full square has been set aside for the village church and cemetery so that in time the Church of Saint Louis, King of France may be enlarged and a house built when we have a permanent priest to live in it. Until then – we make do.

Alas, we have no pipe organ or harpsichord

but violins are plentiful and Rene Kiercereau, our church cantor, has been rehearsing the music for weeks with a sizable choir – sizable that is for a village of one hundred and fifteen houses! I can hardly believe that in a little less than six years we have grown so. There are more French from Quebec among us than any other people, though throughout New France you may be sure the customs and traditions of our homeland are cherished and being preserved. Many of these are voyageurs who travel the rivers to trade with the Indians and to explore new routes for trapping and fur trade.

When Monsieur Laclede and my Auguste first

arrived in this area in 1763 they wintered at Fort de Chartres for there was not a single building here and nowhere to store all they had brought to trade with the Indians. Louis Ste. Ange de Bellerive, who left there to be military commandant for this village, will be our guest for the Reveillon and tomorrow for the Christmas Ball. He is a kindly gentleman and treats my little ones in a grandfatherly way. 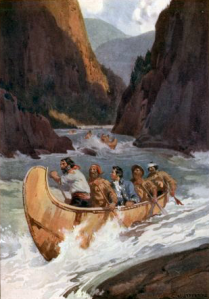 To a man, our voyageurs made it home to Saint Louis before winter set in. It is crucial to get clear of the mountains before then, for to be caught in a snow storm means almost certain death. This promises to be a harsh winter. The river below is choked with ice and we keep the children away from it but earlier today they skated on the mill pond that Tayon (Joseph Michel) created when he built his flour mill and which Monsieur Laclede since purchased and enlarged. It is a beautiful sight now surrounded with snow but you should see it in the summer when Indians of many nations set up tipis along its shores and spend the summer trading here!

It snowed again today but the clouds have cleared long enough for a half moon to make its appearance as crystalline white as the snow. Two moons this December! Hopefully they will be harbingers of a bright new year. December 1770 began with a full moon and it will end with one. Ah! I hear the children now.

They are so excited! To be dressed

in their finest clothes and stay up past midnight to hear the beautiful carols sung in church. Before they went to sleep they helped – very carefully – to put our simply carved figures of the Holy Family, the shepherds, the sheep, an oxen, a cow and three angels in the creche. And after the Reveillon they will place their little shoes beside it and be carried off to sleep, dreaming of Christmas treasures. Ah, to be a child again just for tonight!

There are more families joining the village all the time and so many babies being born! There are sadly deaths as well. Jeanette Forchet lost her husband, Gregoire (and Saint Louis lost an excellent blacksmith) this year. It will be a bittersweet holiday for Jeanette and her three young children. But she will manage. Indeed she may prosper! For not only is she is an excellent laundress but she bakes the best bread in Saint Louis.

I’m afraid our village’s nickname “Pain Court” is going to stick for we are always “Short of Bread”. But in this place people (people from many different places!) pull together when one is in need. I sent Baptiste to Jeanette earlier in the week with strawberry and grape preserves we made up from the fruits of our summer garden. Other families have brought fresh meat since she no longer has Gregoire to do the hunting.

Do I ever miss New Orleans? Of course! Most especially the mild winters and the seafood fresh from the gulf! But I have carefully saved my mother’s recipes and the best of Renee’s (though I am well quit of him in every other way) and my kitchen smells of home. And sometimes too I miss the abundant markets – bananas and oranges – and the excitement of great ships unloading their cargo from all over the world. But otherwise I am content – nay, excited! For this situation on the bluffs above the great river is beautiful beyond words and we are carving out a new life here.

I’m being urged to get ready so

I must close soon! We will miss Auguste again this Christmas for he is wintering a third year with the Osage. I no longer think of him as my little boy. He is fully a man and will make a great success of himself. Jean Pierre is following in his footsteps and thinks himself very mature. Mentored by Monsieur Laclede he is as much the diplomat as his teacher, who says that if they – Auguste and Pierre – should one day become business partners, there will be no stopping them. What to say in closing about my three little girls except that they are my treasures and will hopefully stay close to home for many years to come and not go rushing off in the wilderness like their brothers! I shall see that they don’t.

It is snowing again and Theresa is preparing lanterns to light our way to Midnight Mass so I will finish wishing you one last time, Cher Ami, a joyous Christmas and a bright New Year.

* In the winter of 1770, Marie Bourgeois Chouteau, the founding mother of Saint Louis, might have written home to New Orleans in this way. ** Croquecignolles are deep-fried or baked donuts or crullers – something like beignets.